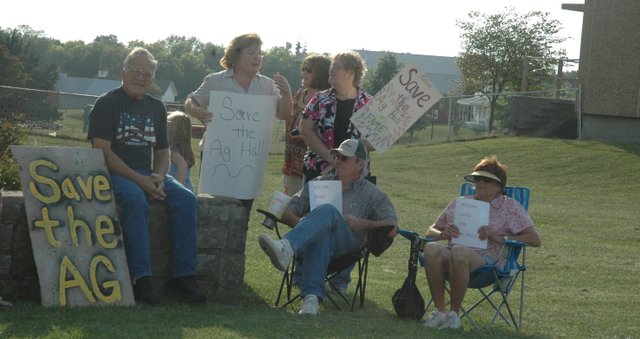 Protesters with Save the Ag Hall of Fame rally in support of the National Agricultural Center and Hall of Fame. The rally was staged in September prior to a board of governor's meeting.

Officials with the National Agricultural Center and Hall of Fame this week continued wrestling with the center’s long-term future amid a lingering financial crisis.

The center’s board of governors met in a closed work session Tuesday at the center in Bonner Springs. Interviews with board members afterward revealed one suggestion during the meeting was to release all staff members, including chief executive officer Tim Daugherty, from their positions effective Dec. 1 when the Hall of Fame generally is closed for the winter season.

Cathi Hahner, a board member and former Hall of Fame director, said the idea would save money for the Hall of Fame while a final decision regarding the site’s future was being made.

“Unfortunately, we are really in a financial crisis,” said Hahner, who also noted staff costs alone are more than $20,000 per month.

The National Agricultural Center and Hall of Fame currently employs three people on a full-time basis, three on a part-time basis and several people that are what Daugherty described as “on call” to assist with school groups and events at the center.

“I asked the current executive board of directors to resign,” O’Rourke said after the meeting.

O’Rourke noted that half of those directors have been on the board for approximately 25 years, “and that’s detrimental to the future of the Agricultural Hall of Fame,” she said.

Bob Carlson, who chairs the board of governors and also sits on the board of directors, said he would relay this suggestion to the other members of the directorial board for consideration.

Hahner said she expected a decision regarding whether staff would be released during the closed winter season at the next board of governors meeting. That meeting date has not yet been set, but Carlson said he expected the board to meet before month’s end.

Meanwhile, the Hall of Fame still is waiting on a proposal from the Wyandotte County Fair Board to operate the center. During Tuesday night’s session, governors granted the Fair Board an extension until mid-December to submit its proposal. The Fair Board originally had a Nov. 16 deadline but had requested more time.

Still on the table is a proposal from the Unified Government of Wyandotte County and Kansas City, Kan. It proposes to take over the Hall of Fame and the 160 acres on which it sits, operating the center for a minimum of three years.

While the governing body awaits a proposal from the Wyandotte County Fair Board, Carlson said the level of funds available to the center would depend heavily on what is decided on in terms of staffing over the winter season.

“…Because if we cut back more on staff rather than cutting back less on staff, then our (funds) would last even longer,” Carlson said.

And though disagreements abound, most members agree the center has a future. Both Hahner and Carlson said the overriding consensus Tuesday among the board of governors was that the best possible outcome would be to save the Ag Hall.

“Oh I think it’s entirely possible that it can be saved,” Carlson said. “Absolutely.”