Voters make their choices Tuesday afternoon at Holy Angels Catholic Church in Basehor, where residents of the city of Basehor were assigned to vote. 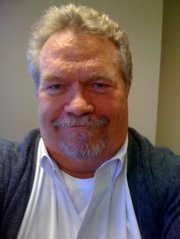 Basehor residents will vote in February on whether to remove up to half of the city’s elected officials from office.

A judge will rule on Hill’s recall in a hearing set for Jan. 11, and if it’s allowed to proceed it will also appear on the Feb. 28 ballot, Klasinski said.

Residents earlier this month handed in their petitions for the recalls of all three officials, Klasinski said, and the county determined that all three had enough valid signatures to prompt an election.

Klasinski said each petition contained easily enough signatures to proceed, but the county had not counted the total number of valid signatures each one had, after it had determined that the number was sufficient. The petition for Hill’s recall required 190 signatures from registered Basehor voters, while the petition for Mertz required 124 and Dysart’s required 193.

Maureen Weiss, a member of the committee seeking to recall Mertz and Dysart, said that after the end of the year the group would move on to “phase two” of its mission, campaigning in advance of the recall election. She said she thought the group might grow larger now that the election is confirmed, and that she believed a “silent majority” of people would support the recall of Mertz and Dysart, even if they didn't all make their support public.

“I'm very happy that we're going to get the opportunity to move forward with the recall election and give all the people of Basehor an opportunity to weigh in on this issue,” Weiss said.

Weiss and the other two petitioners, Trudy Stonacek and Wendell King, accused Mertz and Dysart of violating state open-meetings laws in deciding to fire former city administrator Mark Loughry in September, a charge both have denied.

Attempts by the Sentinel to contact Mertz and Dysart for this story were unsuccessful.

The group seeking to recall Hill accused the mayor of misuse of public funds connected to purchases of a scanner and coffee pot with city funds, as well as health benefits and a severance payment given to Loughry. Hill has also denied any wrongdoing, saying the purchases in question were for his office at Basehor City Hall and that his actions regarding Loughry were authorized by the former administrator's contract and the city council.

Attempts to contact the members of the committee seeking Hill's recall — Marilyn Townsend, Elaine Bundy and Bob Moore — for this story were also unsuccessful.

A Leavenworth County District Court judge on Tuesday set a hearing for Jan. 11 in the case of Hill's challenge of his recall. Klasinski said a final decision on whether to put Hill’s name on the recall ballot would be due on that day, as the county would need to begin preparing ballots soon after.

Hill’s challenge of his recall petition, filed on Dec. 8, centers on his contention that, in the petitioners' official grounds for his recall, the facts they presented do not actually show any violation of state law as they claimed. Court documents submitted by Hill's attorney, Jeffery Sutton, say the group's claims were too vague to demonstrate any illegal action.

“The facts that were given have no nexus to the statutes cited,” Hill said.

Hill said his challenge did not concern whether the petitioners’ claims about his actions were true. “It’s up to the voters to decide” if the facts are true, he said, if an election does occur.

Hill's signature appears on the petitions to recall Mertz and Dysart, as do the signatures of city council members David Breuer and Travis Miles, as well as Loughry.

Susan Kendrick, a Basehor resident for nearly 40 years, was one of the voters who signed the petition to recall Hill. She said the mayor should be more open with his Basehor constituents.

“We just don't feel that he is being honest and forthright,” Kendrick said.

Openness was also a concern expressed by Vickie McEnroe, who has lived in Basehor about 35 years and signed the petitions to recall Mertz and Dysart. She said the two council members should have provided more information about their decision to fire Loughry.

“To me, it just sounded like things weren’t on the up and up, that they were doing things that weren't out in the open,” McEnroe said.

Weiss said that, although she and the others trying to recall Mertz and Dysart were happy for the issue to go to a vote, she hoped that the issue would not promote division in the city.

The recall election will take place at one polling location, Father Quinlan Hall at Holy Angels Catholic Church, Klasinski said. As in any other election, she said, advance voting would be available.

The election will be the first in Leavenworth County to be affected by the new Kansas voter ID law passed earlier this year. Klasinski said that in addition to bringing identification when they come to vote, residents would need to register to vote at least 20 days in advance of the election to be able to participate.

Though the county will administer the election, the city of Basehor will foot the bill. Klasinski said last month that the county would place all Basehor recall questions on the same ballot to save the city additional expense, and an election would likely cost the city up to $4,500.