Sumner pulls away from Bonner Springs in fourth quarter

Bonner Springs senior Erica Smith (13) leaves the court for the last time after the Braves lost to Sumner Academy in the Class 4A substate semifinals. Smith played varsity basketball for four years at BSHS and was a part of 29 wins. More than half of them came during a senior campaign where she led the Braves to a 15-6 record. 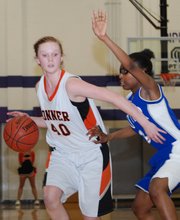 The Sabres repeatedly built six- or seven-point leads only to see the Braves whittle it back to a one-possession game.

Finally, after a last-second put-back to close out the third quarter, the Sumner girls basketball team took control for good and went on to win, 43-29, in the Class 4A substate semifinals Friday night at Piper High School.

The loss closed out the best season in recent memory for Bonner Springs as the Braves compiled a 15-6 record.

“It came down to turnovers,” BSHS coach Clay Oakes said. “We had several opportunities when we were down two points, three points, to get over that hump and maybe take the lead, and each time we were in that position we turned the ball over. There when we were down two, or even when we tied it up and we had a chance to take the lad we turned the ball over a couple times and then it went from being tied or two down to us being down four or five. It just seemed like there were a few opportunities there and we just couldn’t take advantage of them.”

Sumner opened the game on a 7-2 run during the first two and a half minutes, but a put-back by Anna Deegan, two free throws from Emily Wilson and a coast-to-coast layup by Deegan put the Braves on top 8-7.

It was their only lead of the game.

Sumner answered back with a 6-0 run to end the first quarter and claim a 13-8 lead.

The Sabres used a 3-pointer early in the second quarter to take an eight-point lead.

Erica Smith scored on a runner in the lane and Deegan made a free throw and a 3-pointer during a 6-1 run that pulled the Braves back within three at 17-14. The teams then swapped free throws until the Sabres took a 21-18 lead into the locker room at intermission.

Sumner started strong in the third quarter and appeared ready to put the game away as it built a 27-20 lead. The Braves stormed back once again, however. Erica Wilson grabbed a rebound off of a missed 3-point try by Smith. Wilson was fouled and buried both free throws. The next time down the court Erica Wilson scored again on a strong post move. Then, after the teams traded turnovers, the Braves tied the game at 27-27 when Haley Hoffine found Yessenia Hernandez wide open at the top of the key for a 3-pointer.

Momentum was in Bonner Springs’ favor, but Sumner seized it right back when Kathleen Brisbane grabbed an offensive rebound and scored on a put-back with one second left in the quarter.

The Sabres outscored BSHS 14-2 in the fourth quarter to claim the victory. Deegan led BSHS with 10 points — all in the first half.

Sumner advanced to face Basehor-Linwood in the substate finals.