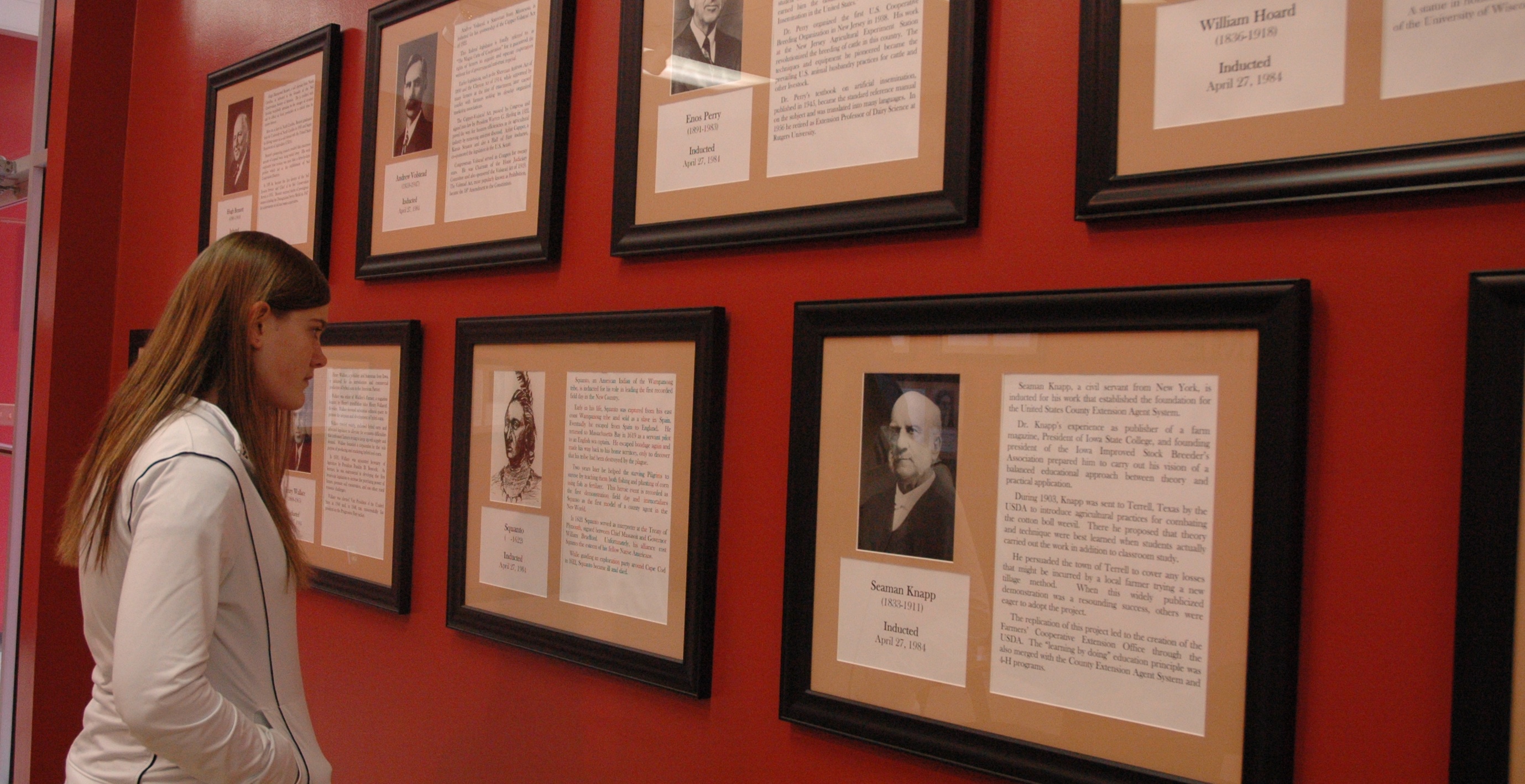 Laurel Sewing, from Lawrence, peruses the Hall of Fame at the ag center. Enlarge photo

The 2011 season may have ended at the National Agricultural Center and Hall of Fame, but there won’t be any taking it easy for the center’s executive director and board of governors when it comes to fundraising efforts.

If anything, Executive Director Cathi Hahner said, organizers over the winter break will work just as hard as they ever have to bring in much needed sponsorships, grants and donations.

“We always wish we had enough cash reserves that (we) could take it easy, but we don’t, so we have to keep scrambling and working hard … That will be our goal over the next four months, is really focusing on fundraising efforts,” Hahner said.

The Ag Hall closed for the season on Tuesday, Nov. 15. And while the center is “certainly not out of the woods yet” financially, as Hahner said, she would characterize the 2011 season as being a better and, in many ways, more exciting one than the season that preceded it.

The 2010 season was a rough one for the Ag Hall of Fame. That was the year, Hahner said, when a lot of catch up had to be done by organizers to try to rebound from the even more troubling 2009 season — the season when internal disagreements and a bleak financial situation almost caused the center’s doors to close for good.

Now, however, things are on the upswing and the center is finally gaining back the national recognition Hahner said it deserves. One of the highest points of the year was the August induction of country music legend and Farm Aid founder Willie Nelson into the Ag Hall of Fame. The induction ceremony took place prior to the Farm Aid 2011 benefit concert staged Aug. 13 at LIVESTRONG Sporting Park in Kansas City, Kan.

Another high point of the season came through Carl DiCapo, noted Kansas City, Mo.,-based fundraiser, who became a member of the Ag Hall board of governors in 2010. He is also the national president of the center’s board of trustees. Through DiCapo’s efforts, the center this year was able to secure a $100,000 challenge grant. The donor of the grant, who wishes to remain anonymous, will match any donations the Ag Hall receives up to $100,000. Though no tangible donations have yet been received toward that grant, Hahner said the center had already received about $50,000-worth of pledges toward the grant.

An improvement in events has been seen this year, as well. Hahner said no money was lost an any events since the center had received enough sponsorships to cover all event expenses, including those for July’s Tractor Daze and October’s Trick or Treat on the Farm. Last year, the Ag Hall lost money on some of its events, including Santa’s Express, which was canceled as a result.

Hahner said she didn’t yet have an estimate on the total amount that was earned through event admissions. But she said the center received about $8,000 through being a beneficiary of the Village West Wine Fest, which took place in September at Schlitterbahn Kansas City Waterpark.

Much focus was placed on exhibits this season, Hahner said, with a goal of making them more interactive. She said the bee and corn exhibits, both located in the main gallery of the center’s museum, had been updated — the bee exhibit now includes a hive that visitors can walk through, while the corn exhibit includes a new mural depicting all the different uses for corn.

The updates have “spurred some excitement of what we can do with still very minimal dollars to make agriculture more exciting and more kid-friendly,” Hahner said.

Still, updated exhibits and a little more money in the bank don’t amount to a walk in the park just yet, Hahner said. She said there was enough in cash reserves to last through the winter. But there is still the matter of settling the contract with former Ag Hall CEO Tim Daugherty, who was laid off at the end of the 2009 season, along with the center’s entire staff, in a cost-saving measure.

Daugherty’s $125,000 yearly contract included a $42,500 performance bonus, which Daugherty hadn’t received by the time of his layoff. He was supposed to have received it in 2009, but given the center’s financial circumstances, he had asked the governing board to hold off on paying him the total amount of the bonus. Under the agreement he made with the governing board, his bonus would, instead, accrue 5 percent interest per year until it was paid.

Hahner said during a 2010 interview with The Chieftain that, despite Daugherty’s layoff, the center was still legally bound to settle the remainder of the unpaid contract, plus the bonus and 5 percent yearly interest. Daugherty’s contract was paid off in 2010, but his performance bonus and the interest it has accrued has not yet been settled. Those funds will have to be found by July of 2012, Hahner said.

Also left unpaid is the money that was taken out of the Ag Hall’s Etta Blanche Dahlgren scholarship account in September of 2009 to keep operations running. The amount taken out was a little more than $163,000, but the account is restricted, meaning those funds will have to be paid back eventually.

To settle the Ag Hall’s debts, Hahner said another land sale down the line is an inevitability. For now, she said, the focus will be on securing donations or grants from supporters willing “to be invested in the future of the Agricultural Hall of Fame, as well,” as she said.

“I mean, it’s easier,” Hahner said. “There’s a lot of momentum going, but we’re certainly not out of the woods yet.”

Hahner said the 2011 season would be “hard to top,” but there were already some exciting events in the works for 2012. One of those will include a new induction to the Ag Hall of Fame: Ray Kroc, who was largely responsible for the worldwide success of the McDonald’s Corporation.

The Ag Hall will reopen for its 2012 season in mid-April.