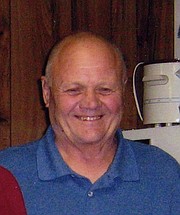 Gilbert "Wayne" Wichert died January 12, 2008, with his family at his side. Celebration of Life services will be at 2 p.m. Friday at the Bonner Springs Baptist Church, 303 S. Bluegrass Dr.

Mr. Wichert was born in Adams, Okla., on June 14, 1934, to Jacob and Lula Wichert. He received the Lord while attending a Mennonite Brethren Church revival in junior high. He loved baseball and played throughout high school and college, and even accepted an opportunity to try out for the Brooklyn Dodgers. He served in the U.S. Army for several years.

He married Evelyn Grace on June 8, 1957, in May, Oklahoma. He drove for both Graves Truck Line and Churchill Truck Line. Upon retiring he enjoyed driving a bus for the Basehor-Linwood School District.

He had a passion for sports. He was a devoted fan of the University of Oklahoma and the St. Louis Cardinals. He also loved watching his own grandchildren play sports and was one of their most devoted fans.