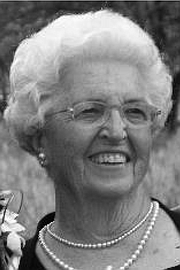 Funeral service for Edna Irene Elder, 85, Linwood, will be held 10:00 a.m. Monday, October 6, 2014 at Warren-McElwain Mortuary in Lawrence. Burial will follow at Mt. Sidney Cemetery in Linwood. She died September 30, 2014 at her home.
She was born on January 3, 1929 in Linwood, KS, the daughter of George and Pearl (Hubbard) Henik.
She was a long-time member of Linwood United Methodist Church and served many years as a Sunday School teacher, Sunday School Superintendent, Board Chairperson, and youth sponsor. She belonged to the Linwood Extension Homemakers Unit, and served on the Leavenworth County Extension Council. Edna loved working with youth and helped organize the Lucky Clover 4-H Club, and was the ‘lady on the microphone’ at the Leavenworth County Fair for 31 years. She enjoyed many years of working local elections.
Edna loved to learn. She attended Kansas University for 2 years and was a teacher of all 8 grades in Pleasant Valley School, a one-room schoolhouse. She was also a substitute teacher in Linwood and Basehor schools and worked several years at the Linwood Post Office.
In addition to all Edna did in the community, her life was consumed with her love for and commitment to her family.
Edna married Jimmy “Jim” R. Elder on June 9, 1951 in Lawrence, KS, and was his farming partner during their 63 year marriage. He survives of the home.
Other survivors include son, LeRoy (Joyce) Elder, Linwood; daughter, Sandra “Sandy” (Ron) Hill, Topeka; sister, Lola Mae Torneden, rural Linwood; brother, Fred Henik, Shawnee; six grandchildren, Michael (Jennifer), Crystal (Michael), Kevin (Sara), Jessica, Brendan (Liza), Allison, and 10 great grandchildren, all whom she adored. She was preceded in death by her sister, Ruby Guenther and brother, Frank Henak.
The family will greet friends from 2:00 – 4:00 p.m. Sunday, October 5, 2014 at the Mortuary.
Memorial contributions may be made in her name to the Linwood United Methodist Church and may be sent in care of the mortuary.
Online contributions may be sent to www.warrenmcelwain.com
Please sign this guestbook at Obituaries.LJWorld.com.