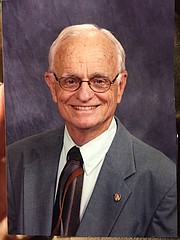 Kenneth Ray Reed, 83, of Texarkana, Arkansas, passed away on Sunday, July 26, 2015, in a local area hospital.
Mr. Reed was born in Hays, Kansas on May 28, 1932. He graduated from Hays High School and earned a Masters of Education at Fort Hays State University. From 1954 to 1956, he went into the U.S. Army as an Artillery Fire Control Crewman. He was a teacher, coach and sports official in western Kansas for many years. Later, after moving his family to Bonner Springs, Kansas, he worked for the Wyandotte County Health Department as a food inspector and a night clerk at a local 7-Eleven Store. In 1993 with his wife, Doris, they moved to Texarkana, Arkansas, were they enjoyed traveling and hanging out with family and friends.
Mr. Reed was heavily involved in the Bonner Springs Nazarene Church in Bonner Springs, Kansas and the First Church of the Nazarene in Texarkana, Texas.
He was survived in death by his wife, Doris (Davis) Reed, of Texarkana, Arkansas; his sons, Mike (wife, Sue) and Randy (wife, Shelly), all of Bonner Springs, Kansas; his twin sister, Kay Lantz, of Fort Wayne, Indiana; six grandchildren, three great grandchildren; two stepdaughters, Diana Davis and Sheila Walls (husband, Doug); five step grandchildren, eight great step grandchildren and one great, great step grandchild.
A memorial service is to be held in the gym of the First Church of the Nazarene in Texarkana, Texas, on Wednesday, July 29th at 10am.
Services will be at 10am on Friday, July 31, 2015, at Alden-Harrington Funeral Home in Bonner Springs, Kansas, with Minister Nathan Hann of Bonner Springs Nazarene Church officiating, with burial to follow with Veterans Honors in the Bonner Springs Cemetery. The family will receive friends at the visitation on Thursday, July 30th from 5pm-8pm at the funeral home.